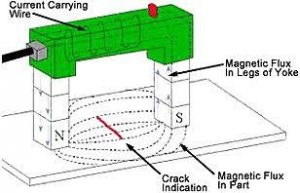 MFL magnetizes the conducting material under test with a strong magnet (usually steel). The magnetic field “leaks” from the steel when imperfections, such as corrosion or material loss.

MFL probes have a magnetic detector situated between the magnet’s poles and detect the leakage field. A magnetic circuit formed between the part and the probe during the inspection. The induced magnetic field saturates the part until it can no longer hold any more flux. The flux overflows and leaks through the pipe wall, and strategically placed sensors can correctly quantify the leakage field’s three-dimensional vector.

Since magnetic flux leakage is a vector and a single sensor can only measure one direction, every given probe must have three sensors to measure the axial, radial, and circumferential components of an MFL signal.

Request a Consultation Get Started